On 27 December 1956, the Spanish Official Gazette published a decree-law containing instructions for the drying of the Antela Lagoon in the province of Ourense, one of the largest humid ecosystems in Spain, with the aim of “increasing production and improving the standard of living in the countryside”. The drying works that began in 1958, were planned in three phases, which ended in the 70s with a process of land consolidation.

This civil engineering work resulted in an environmental catastrophe in the area, not only causing the extinction of some animal species, but also changing the climate of the area due to a water imbalance that causes periods of drought during the summer. Overexploitation of livestock and agriculture in the region has contributed to the depletion and pollution of groundwater. Without entering into political or economic issues, that decree published on page 8221 of the Official State Gazette has caused a commotion in this territory, radically changing the physiognomy of the place and causing a deep wound in the identity of the peoples who inhabited it.

There is a natural memory of Antela’s lagoon that is preserved by those people who had direct experience of its existence, and another artificial memory made especially with old photographs and testimonies contaminated by nostalgia that weaken and fragment with the passage of time. I imagine this memory with a back and forth channel, where the memories that the place still has the capacity to evoke travel, or that the subject himself voluntarily travels to try to recover them. A time will come when this path can hardly be traveled in one direction.

Identity, landscape and memory altered by the 1528 words of the decree-law are the central ideas of this project. Words take over the landscape, trying to justify the crime that is about to be perpetrated. Arguments that by force of repetition become an intimidating reality that the individual, cornered and reduced to play the role of a figurehead, accepts with submission. A territory colonized to satisfy the “living concern” that society quantifies in terms of efficiency and productivity. A decree disguised with the logical perfection of the circle hides in its entrails a violent outburst that will annihilate the land. A fatidic number that will implacably sentence the only possible way of life that reconciled human beings with Nature. Identity torn and fragmented, stored in an old box that will be lost in a remote place of memory.

The cardboard that functions as a container in the collages of the first part, on which the texts of the decree are pasted, also fulfils the function of signifier in the composition by isolating, delimiting and fragmenting the different elements that are organised in it. Old photographs cut from Xosé Luis Martínez Carneiro’s book are combined with images from my project “Limia’s Sketchbook” (OCA Landscape, assignment five) to establish a connection between the times before the drying out of the lagoon and the current situation. The texts of the decree-law are taken from the document published in 1956, so the original typography refers directly to that time. The human figure, always extracted from old photographs, is integrated into the composition as a small and displaced presence.

In the two digital montages, the human figure takes on a tragic protagonism: rounded up by the text of the decree whose consequences will be identical regardless of the key with which one wants to read the text (positive or negative) or confined in the prison of a nostalgic memory while contemplating how a flock of storks perhaps leaves the place forever – threatening to her left the ominous page number of the decree printed on a background of the same tone as the woman’s shawl, resembling the tattoo stamped on the prisoner’s skin.

Demonstration of technical and visual skills

From the intervened landscape exercises that I did in the course work of this unit (see The Layered Image), I thought it would be a good idea to try to explore that territory by trying to combine the available materials:

The idea of using cardboard as the basis for collages comes from the exhibition Rosendo Cid, which I recently attended (see reflection on it), where a curious installation made of cardboard made it possible to construct a small stage on which the different elements of the composition are placed, with the intention of distancing them. Later I realized that torn cardboard contributed to the meaning of the image by increasing the tragic feeling that feeds the narrative of this story.

The texts used come from page 8221 of the decree, digitally scanned, cropped and enlarged in Photoshop, for printing and cropping again. I thought it was essential to use the original text, as typography helps to locate its origin temporarily.

The construction of the diptych 4 in Photoshop required the patient to place the texts of the decree in the quadrants into which I divided the image, situating the center of the circle in the two women who appear in the scene. For diptych 5, I was interested in the idea of using the page number of the decree to create a dark and threatening mass – with some similarity to the tattoos used to mark prisoners in concentration camps – to help underline the negative sensation of the decree and its consequences. 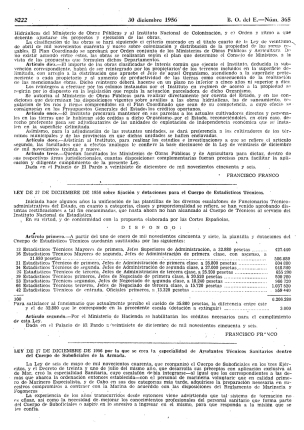 It seemed to me that the diptych offered a coherent way of presenting an idea that is articulated on the idea of contrast, the opposition of two irreconcilable concepts: traditional and sustainable way of life against an economic and destructive model of whose negative effects we are already fully aware.

There are two criteria for the use of black and white. 1) Maintain the opposition described in the previous paragraph more in the formal and conceptual ambit than by contrasting the black and white vs. colour opposition that would inevitably occur when combining old and modern photos. 2) Avoid the different tonalities introduced by the cardboard, of which I was only interested in the texture and shape of the tears and cuts. The use of the square table format also serves the purpose of the opposition, especially in diptychs 2 and 4.

It is inevitable that the texts involved in the photographs are written in Spanish. Even for an inhabitant of the area this also provokes a feeling of aggression, since in the region the Galician language is mostly spoken – forbidden during the dictatorship of General Franco to which the decree belongs – and the use of Spanish is therefore considered as an act of domestic colonialism of the central government. In order to facilitate the reading of the images, the translated texts accompany each diptych.

Although this is a strange territory that requires certain plastic skills that are foreign to the photographer and the result obtained is perhaps a little far from the usual collage, I consider that the set of 5 diptychs produced has allowed me to explore a matter that interests me from a new perspective, which will allow me to include them in the third part of a project called “Cadernos da Limia” (Limia’s Sketchbook), which is articulated in three sections around the now extinct Laguna de Antela: Landscape, Portraits and Ideas.

I think the advice given by my tutor at the presentation meeting is key: when planning an assignment, think more as an artist than as a student. Although I may still be at a very basic level of experimentation, it is interesting to discover how new techniques can be useful when used to serve the expression of ideas and concepts.

If we understand landscape as a cultural construction of territory, the intervention of landscape photography manifests the artist’s intention to transcend the realm of the visible, projecting his intention onto territory and revealing an unexpected layer of meaning to the viewer.

Intention and chance intervene in some of the series of British artist Stephen Gill – such as Hackney Flower or Outside In, for example – where the objects with which the photography intervenes help to reveal the spirit of the place and introduce an element of surprise or discovery from which both the author and the spectator benefit.

With the purpose of reminding us of the subjectivity implicit in the photographic act, the American John Pfahl intervenes physically banal landscapes, intentionally adjusting the introduced elements so that they are perceived in a different place from where they really are.

With an equally complex technical elaboration, the work of the Spanish artist Javier Riera uses light to literally project geometric structures on the landscape and create complex visual scenarios:

Also by the Spanish photographer Eva Díez, her series “Lugar de ausencia” (Place of absence) in which she digitally intervenes empty landscapes with the silhouette of a house, in what could be an attempt to offer the spectator the possibility of inhabiting space, reducing the fear of loneliness through a recognisable and comforting image.

Rosendo Cid incorporates found objects into his works, incorporating images and texts in an unconventional way. Isolating a fragment of the text from the whole of which it forms a part and using it in a completely different context reveals itself as a powerful strategy for modulating the reading of the work of art.

AA School of Architecture, 2015. Stephen Gill – Mostly Within the Area: Photographic Projects from in and around East London, Youtube. Available at: https://www.youtube.com/watch?v=jMBb9ncBw00 [Accessed April 20, 2019].

One thought on “Assignment One: Combined image”